We founded Kodiak in April 2018 with the belief that a world-class team narrowly focused on long-haul trucking could quickly catch up to the burgeoning self-driving trucking industry, and just as quickly surpass it. We received our first truck in December 2018, and carried our first commercial load from Dallas to Houston just eight months later. Now, two years after our first autonomous loop around our parking lot, we are making disengage-free customer deliveries on the middle mile.

The Kodiak Driver navigated the entire highway portion of our route — 205 miles of Texas highway — for the first time in December. We’ve never been big on publicizing incremental achievements, but this milestone in Kodiak’s history is worth sharing. We posted our first run at 10x speed below.

With all the technology pieces in place, the Kodiak Driver completed eight more disengage-free runs in just the first week following our first disengage-free delivery. This includes one entire disengage-free day, with two back-to-back round trips between Dallas and Houston, during the day and at night. Watch all 800+ miles in another 10x time-lapse. We know it gets boring. But when has a company released this much autonomous driving footage?

Making these first fully-autonomous deliveries in Texas history while navigating all the unscripted complexities highway environments have to offer is proof of how far the Kodiak Driver has come in 2020, and demonstrates that it stands with the best-performing technology stacks in the autonomous trucking industry.

This may not sound like a big deal. After all, the first fully driverless delivery occurred back in 2016. But Kodiak’s delivery was no stunt for the press or demo for investors. We used our production hardware and software, without resorting to shortcuts that only work under constrained conditions. The delivery reflects that we’re increasingly able to handle the full range of highway driving scenarios, from easy stuff like the open road and lane changes to tough challenges like vehicles on the shoulder, merges, and of course complicated construction zones.

Many think AV development is like training for a marathon — first you take a run around the block, then that block turns into a mile, then 10, and eventually after enough training, you can run the whole thing. But AV development is actually more like training for an ironman triathlon. A self-driving system needs to do a lot of things well, from negotiating heavy traffic to navigating construction zones. Just as running a marathon in record time doesn’t do you any good if you can’t swim, logging hundreds of thousands of test miles doesn’t do you any good if you have to drive every construction zone manually.

As such, it turns out that it’s relatively simple to create an impressive demo system that performs really well most of the time. You can choose an easy route where you know you won’t see any construction zones or traffic and won’t have to change lanes. You can focus on what’s right in front of the vehicle, so you don’t have to worry about tracking confusing objects on the periphery. You can use RTK-based GPS positioning — a system that employs a network of ground-based GPS transponders to provide location data accurate to the sub-inch level — on ultra high-definition maps, so your vehicle knows exactly where it is.

These systems work, but they will never get you where you need to go no matter how much practice you get. There will always be another obstacle in the way. Ignoring the periphery works well, until you get cut off and don’t have enough time to prepare. High-definition maps are great, until a construction zone opens up and the map changes. RTK-based GPS positioning is powerful, but it can be finicky in bad weather or in remote locations, so you cannot rely on it to safely deploy an actual driverless product. Furthermore, the hardware is too expensive to scale. And of course you can’t build a business around low-traffic routes that never see complex driving scenarios, or by asking customers to work around your schedule, instead of delivering goods when your customers need them.

In contrast, we’ve designed the Kodiak Driver for deployment, not demos. We’ve focused on building the technologies we need to handle every obstacle, from construction to cut-ins and everything in between. We’ve written about some of these technologies in the past, including our purpose-built for trucks technology stack; our modern, simulation-driven development approach; our designed for construction zones planner, and our principles-based perception system, Kodiak Vision.

Our first disengage-free delivery reflects our different approach. Instead of rolling out a demo version of the Kodiak Driver early in our history, we navigated a major commercial freight lane, through a complex mix of urban and rural highways, open road, traffic, and construction zones. We didn’t use RTK positioning, and used our low-definition mapping system, designed for over-the-air updates in case of lane closures or construction. In other words, we can run, bike, and swim, with poise.

This is an incredible moment for Kodiak, and we’re beyond proud of what the Kodiak team has been able to accomplish in under three years. We’re glad we can share the journey with you. 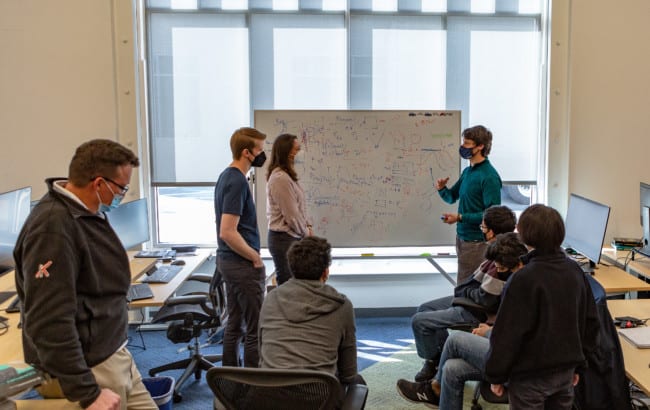 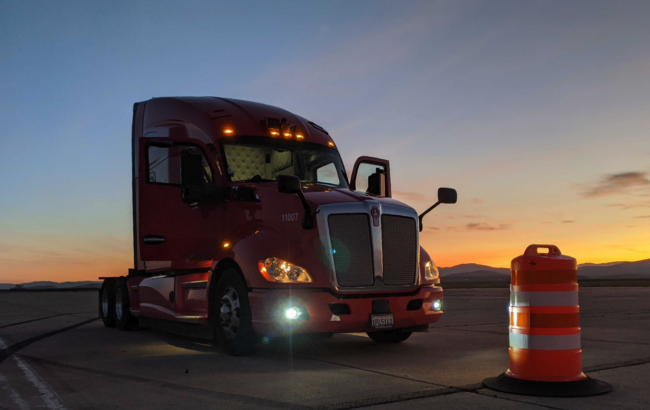 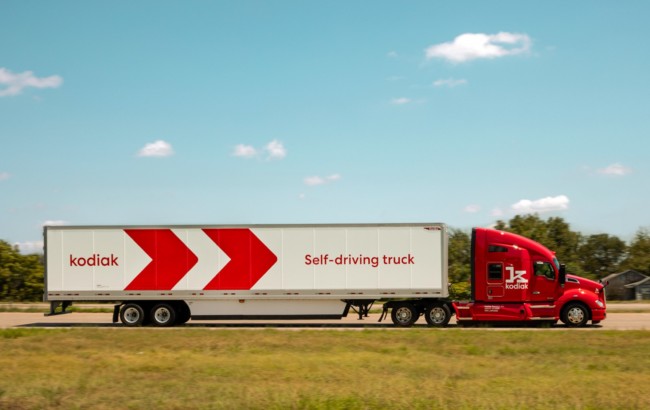 Kodiak eyes the future with $125M Series B
Don Burnette